Skip to content
HomeMoviesWhere did the color go? ‘Women Talking’ and ‘Emancipation’ Cinematographers: Why They Saturate Their Oscar Contenders

Two of this season’s strongest and most articulate award contenders, “Women Talking” and “Emancipation,” have sparked controversy not only because of their powerful subject matter, but also because of each film’s bold and unusual approach to color palette. They can vary in subject matter and scale – “Women Talking” is an ensemble piece that represents multiple points of view and takes place largely in one location, while “Emancipation” is the opposite, an individual character study in the background. the civil war – but they share a saturation in which the filmmakers drained the color from the footage so much that it would be almost black and white. In both cases, there were well-thought-out reasons behind the decision to introduce color in a highly targeted, limited way; IndieWire spoke with the cinematographers behind both films to get two different perspectives on how and why they chose to desaturate.

“Women Talking” is cinematographer Luc Montpellier’s fourth film with director Sarah Polley, and from the start they talked about adding a sweeping, timeless feel to the adaptation of Miriam Toews’ 2018 novel about the women of a remote Mennonite colony who meet in secret to determine how they develop. response to widespread sexual harassment in their community. “Sarah wanted the images to feel as epic as the decision these women had to make,” Montpellier told IndieWire. “He wanted it to feel almost Gothic in nature, to feel the timelessness of what was happening.” Montpellier wanted the visual style to reflect the quality of Mennonite life, which is also a thing of the past in contemporary history. “We wanted the audience to feel a little out of place and not know exactly what time period they’re in. Hopefully that makes the viewer a little more engaged and connected to the story.”

The trick was to make “Women Talking” seem timely, but it’s not too period. They considered shooting in black and white, but decided that it “looked so old that it was too distant from the audience”. The solution was to bring just a little color into the picture, a process largely devised on an iPad that the cinematographer and director pass back and forth, subtly tweaking the images collected by Montpellier during location scouting. “Sarah and I put together the contrast and saturation, which came from a very instinctive place. We just wanted to see how the images made us feel, which hopefully the audience will feel as well.”

Montpellier felt that this approach gave him many things that could not have been done in strictly black and white – or brighter colours. “When we talked about black-and-white photography, one thing that was missing was the ticking of the clock,” he said. “The fact that the sun moves throughout the film is to hopefully create some tension that comes from wondering when the men are going to come back. Adding a bit of color allowed the shift in light to be a bit present, especially during the sunset and twilight moments when the light fades away.

Montpellier also felt that just a little color would keep the film from being too stark or bleak. “I didn’t want the film to be too depressing,” he said. “We have such depressing ideas about human behavior within the film, but it also had to feel like (the colony) is a beautiful place and let the camera drift outward to the children to remind the audience of what women are fighting for and it is a tragedy that they have to leave.”

Knowing how important accurate color calibration would be, Montpellier brought color timer Mark Cooper into the project early on to weigh in on the wardrobe tests and help determine how the color of the clothes would respond to de-saturation. During testing, Montpellier found that desaturation had an additional benefit: “You’re really forced to decide what’s most important to happen within a frame.” The cinematographer also found that he had to light the faces differently to account for the lack of color. “I tend to overexpose, even when the contrast is high, knowing that we don’t have depth of color in skin tones.” Montpellier also paid a lot of attention to the time of day when lighting the faces, relying on the soft boxes around the set. “It’s all designed to not interrupt the performances. With the LED technology, I was able to dial in live how saturated the blue was. On the set, you saw a blue that was very intense, but in our look it became a very subtle thing.”

Finally, Montpellier really enjoyed the challenge of finding the right line between black and white and color. “It was a very nice line of creating the world, but not obstructed,” he said, adding that the clarity of the look allowed him and Polley to get to the heart of the story. “That’s what I love about black and white photography. You don’t have that color spectrum, so you’re immersed in what’s really important. I hope that’s what saturation has done to this movie, which is a fairy tale — that it’s stripped it of the real world.”

“It just worked from the start”

The striking look of “Emancipation,” in which the largely black-and-white frames are often punctuated by color in the form of orange flames, red blood and green swamps, is consistent with cinematographer Robert Richardson’s overall filmmaking philosophy. which he believes should be freed from the single choice of color, aspect ratio or format. (He is, after all, the director of photography who famously mixed almost every shooting style imaginable in “JFK” and “Natural Born Killers.”) “I think the format should change more often in a film,” he told IndieWire. . . “It doesn’t have to stay 1.85 or 1.66 or 2.40 and it doesn’t have to stay black and white or color. It should oscillate better regardless of the emotion of the story.”

Like Women Talking, Emancipation was initially discussed as a potential black-and-white film. “It was the first thing we tested,” visual effects supervisor and second unit director of photography Rob Legato told IndieWire. “Personally, I think black and white period films benefit from being shot in color and choosing how much red, green and blue contribute to the gray tones of the final image. Being able to choose how much red you want will make each red object lighter or darker on a case-by-case basis. Same with green. Foliage can appear much brighter than we’d like, so the ability to reduce grayscale helps reduce its psychological impact on the image. Removing the blue’s contribution made the sky much darker, creating a sense of foreboding that seemed to work well in the story.”

After Legato took this approach, Richardson suggested they try mixing some color back into the black and white. “The color palette of the film turned out to be very impressive,” said Legato. “It worked from the beginning.” For Richardson, the juxtaposition of color and black and white served as a general guiding principle for him and director Antoine Fuqua. “Antoine wanted it to be brutal and beautiful,” Richardson said. “This is extremely difficult to do.” During testing, Richardson initially experimented with colorization not only on a sequence-by-sequence basis, but also on a shot-by-shot basis, but found it too heavy-handed and shifted back to black and white, “occasionally bringing in tones of fire, greens, and switching some blues for night .” 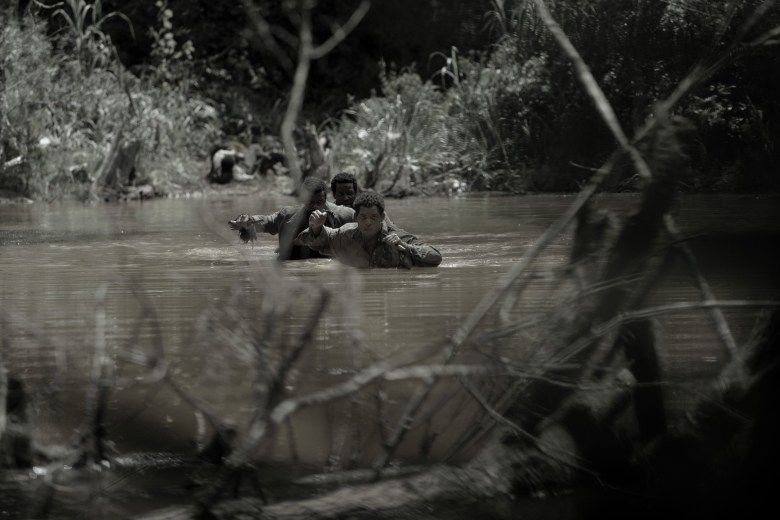 ©Apple TV/Courtesy of the Everett Collection

They found the balance Fuqua was looking for. “We found that full color created too much beauty instead of depicting the stark reality of this hellish landscape,” said Legato. “By adding a little color back, we got the best of both worlds. It wasn’t as simple as an overall saturation, but artistically changing and altering the perception of color density at each moment as needed.” Richardson and Legato often found that isolating and reinstating the color red could add to the force of the violence, or change the palette to convey the psychological state of the film’s protagonist, a slave man named Peter (Will Smith). who escapes from a plantation in Louisiana. It’s a technique that Richardson and Legato have experimented with in some way during six collaborations, including “The Aviator” and “Hugo.”

“It’s an integral part of the photography process and it’s not taken for granted or decided later in the process,” Legato said. “The dailies’ select colorist is tasked with following this special look from day one of production, often in a location within easy reach of Bob and I on a daily basis. In most cases, this look carries over directly into DI and is further refined as sequences are locked.

“I grade on set,” Richardson added. “We have someone from Company 3 (Benny Estrada) in a trailer working on Resolve and we grade the dailies every day.” This meant that Richardson and Legato could use the color of the dailies as a basis for the DI, rather than starting from scratch.

In addition to its aesthetic function, the black-and-white aspect of photography helped Richardson cope with the punishing Louisiana day while shooting the climactic battle sequence. Shot during COVID, hours were limited and the sun was out most of the day. “I’m not a fan of sunlight,” Richardson said. “It’s always too high, too fast. But black-and-white helped me overcome some of the problems I had to deal with in color.” Ultimately, Richardson hopes the look conveys the hope and redemption at the core of the violent tale. “The effect was intended to be highly spiritual. I hope some of these came through.”