Skip to content
HomeMoviesSundance 2023: The best short films from this year’s festival

From gay fetish clubs animated like a Disney cartoon to body-horror comedies, short films are alive and thriving in Park City.

While the odds of a feature film making it to Sundance are slim, short submissions are just as competitive. After two years of virtual events, the festival returned to in-person appearances in its first year, with a record number of short films submitted to the festival, with 10,980 entries from around the world hoping to play in Park City. Short film programmers Mike Plante and Heidi Zwicker were tasked with whittling it down to 64 film and 4 episodic projects and ensuring aspiring Sundance filmmakers would see every single submission.

“We love these movies individually, but part of the choice is how well they fit together as a program,” Zwicker told IndieWire in a recent interview. “They have to come together to create a cohesive whole where each one does something different.”

The holistic structure of the program allows for a wide spectrum of genres and budgets, which Plante highlights as Sundance’s uniqueness. “I think a lot of big festivals find films they like and select them. So when you see them in running order in a theater, it’s interesting how they’re going to play off each other,” he said. “If it’s one of the top 20 movies that destroys everything else, they’re in. So what else do you play? And what is good, and what is promising, but a little rough?

A longtime short film programmer, Plante says he’s happy when one of his filmmakers makes a movie. With programs like the Sundance Institute Labs, often a promising short film can lead to a lifelong relationship with the festival. Last year, Zwicker was thrilled to see Nikyatu Jusu’s “Nanny” play so well at the festival and during the subsequent run after his short “Suicide by Sunlight” premiered at Sundance in 2019.

While short films are an art form in their own right, part of what makes watching short films exciting is knowing that the next exciting feature film director is waiting in the wings to be discovered. Without further ado, here are the ten most exciting shorts playing Sundance this year.

This year’s festival runs from January 19th to January 29th in Park City, Utah. For more information on tickets for in-person attendees and virtual spectators, visit here. See all our coverage of the festival here.

Programmers say submissions from Indonesia have increased tenfold since the festival brought the Sundance Film Festival: Asia Film Festival to Jakarta last year, staying true to its mission to discover emerging filmmakers from around the world. Indonesian filmmaker Anggun Priambodo’s 2013 film “Rocket Rain” is currently streaming on MUBI, but his latest short shows the indie filmmaker’s marked evolution. “Evacuating Emama Emola” follows an incarcerated man and a female prison officer who evacuate his aging mother from her small village during a tsunami threat.

Shot in attractive black and white, humming with a whimsical current, the pair bicker loudly over the roar of the engine. As tension builds over the impending threat, they engage in a hilarious tug-of-war for the fastest route and nuances of ‘steal’ and ‘borrow’. The 18-minute short breeze is accompanied by an amusing stop by a child mechanic and the scheming of the looters surrounding the evacuated houses until its joyful conclusion. It would have been ripe for a feature adaptation if it wasn’t so perfect. —Jude Dry

Writer-director Ben Brewer was one of the seven special effects artists on “Everything Everywhere All at Once,” and his short film reveals another innovative lo-fi use of special effects that goes beyond their most common use. This quirky and inspired body-horror comedy from the Midnight Shorts program uses a single body-shaping CGI concept to tell the unsettling story of a relationship coming together and falling apart.

The official description has a married couple (Anabelle Lemieux and John Giacobbe) “lost in each other,” and it’s literally too sassy and hilarious to detail. Needless to say, Brewer has come up with a brilliant concept that uses David Cronenberg’s concept of micro-budgeting to explore the complex ways couples form bonds over time and the complicated feelings that arise when those bonds don’t last. It suggests a bright, strange and unpredictable future for this new filmmaker. —Eric Kohn 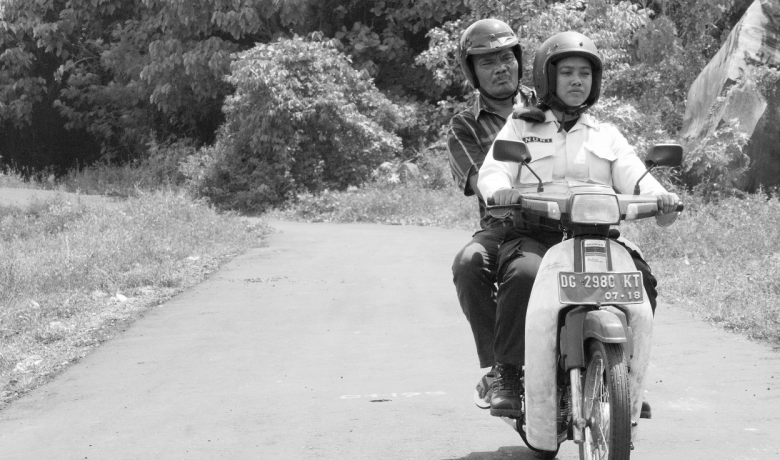 Combining an old-school animation style with coming-of-age themes, this hilarious black-and-white comedy looks like an early Disney cartoon crossed with a gay manga. When a (real) bear plumber shows up at his latest job, he’s inundated with the sights and sounds of a hopping gay fetish club. In his little overalls, he immediately breaks into a sweat, the mass of bodies, limbs and skin distracting him from the task at hand. As a parade of penis pipes, gurgling streams and multi-tools dance past him, the plumber reveals his true desires.

Swiss animator Kilian Feusi, who recently graduated from the Lucerne School of Art and Design, has proven to be a humorous artist with a whimsical eye and healthy but subversive tendencies. More please. – JD

It’s hard to imagine a film at this year’s Sundance that’s stranger, more ambitious and more unclassifiable than “Claudio’s Song” — at least one that’s 10 minutes long. Swedish director Andreas Nilsson’s miniature shape-shifting odyssey begins with the story of a couple of criminals who kidnap a social media influencer after taking his account hostage, then decide to kill him. From this outrageous, satirical beginning, the film takes a few more turns, turning into a charming musical and ending in the future.

Deadpan surrealism is rarely this adventurous and smooth at the same time – you’ll barely have time to sort out what you’re watching before it’s over, as Nilsson leaves you wondering what the hell you just watched. The only certainty is that ‘Claudio’s Song’ is a fully realized vision of how everyone lives as a legacy in their own minds, and ends with one hell of a catchy song. It demands to be seen and debated ad infinitum. -WEDGE

As editor of the Emmy-nominated short form series Hack Into Broad City, Brooklyn-based filmmaker and horror aficionado Daphne Gardner makes her exciting directorial debut with her first narrative short. She revives the feminist horror trend with a welcome comedy, in “Flesh” a hilarious and provocative study of the effect of sexual trauma on a young woman’s relationship with her body – and her orgasm.

The film opens with two worn legs hanging over a dirty tiled bathtub as Tracey masturbates under the running tap. As memories of a past attack surface in quick flashes, the pipes burst with brown water and the woman oozes black cotton. He descends into the eerie basement to discover the source of the sludge—a blockage that can only be cleared by confronting his demons. – JD

With “Air Hostess 737,” Greek director Thanasis Neofotistos completes his trilogy of short films (which began with “Patison Avenue” and “Route-3”) about characters lost in their own minds. Neofotistos explores this phenomenon with a unique filmic device, as his entire short film revolves around the protagonist who dominates the frame, without introducing other characters (with the exception of a fleeting glimpse of another face, in soft focus, for a few seconds).

The whole story takes place from the perspective of flight attendant Vanina (Lena Papaligoura, in a taut, remarkable performance), who struggles with self-image issues about her new braces, anxiety that masks her bigger problem – that the plane also carries the body. about his recently deceased mother. As Vanina’s calm gradually gives way to grief, the world of the plane collapses around her in an exciting subjective spiral that elevates her situation to abstract heights. It’s a poignant and imaginative character study from a director who seems to have created a sharp formula himself. -WEDGE “Shirampari: Legacies of the River”

Filmed in one of the most remote parts of the Peruvian Amazon, Lucia Flórez’s fascinating documentary is a captivating portrait of a father who passes on Ashéninka fishing techniques to his adorable son. A National Geographic Explorer Grant winner, Flórez captures beautiful nature footage without sacrificing character development or storytelling.

Overconfident for his small body, the boy listens intently as his father explains how to make a hook secure enough to catch even the biggest catfish. As the children splash in the river and the men proudly carry their catches, Flórez shows the joy and camaraderie of the community’s everyday life. The film offers a rare window into an otherwise private tradition, but one can sense the ethics behind the camera in the tenderness and admiration with which the story unfolds. – JD

Veteran animator Tom Brown’s eerie and romantic animated short follows a young man escaping the world on a cargo ship. Beautiful 2D animation lends a storybook feel to this bittersweet flight of fancy as Christopher immerses himself in a quiet sea life, bonds with the crew, and wrestles with unexpected desires that arise during his journey. Filled with images of beautiful sunsets and intoxicating dream sequences, the short film is a true cinematic odyssey that is both intimate and epic in scale as it explores the nature of loneliness through its unique backdrop. Expect this to make some waves in the festival circuit and potentially keep it around for awards season. -WEDGE

Any New Yorker can relate to the personal agony of unwittingly hearing their neighbors through painfully thin apartment walls. And in New York, the noises are as diverse and daring as the people themselves. Rarely seen, but always heard: “Troja” is named after the mischievous gay man who falls in love with a modest, straight couple next door. Day and night, Thea (Adina Verson) and Charlie (Michael Braun) are serenaded by the guttural moans and shuddering moans of Troy’s passionate sex life, which seems as endless as his appetite for it. During dinner, washing the dishes, going to bed or socializing, Troy and his lovers’ rotating list becomes the soundtrack of their lives. There’s nothing left to do but overindulge.

If there’s one short ready-to-go at Sundance this year, it’s writer-director Rashad Frett’s “Ricky” — and indeed, Frett is already developing the film version in the Sundance lab. In this sensitive and disturbing look, Parish Bradley stars as a young black man released from prison and trying to stabilize his life with a new job opportunity while struggling to suppress the anger and anxiety that got him into trouble in the first place.

This challenge leads him to a shocking and tragic decision that forces him to face whether he can bear his failures and make things right for once, no matter what the cost. A haunting and emotional look at the underrepresented struggles of recently incarcerated people trying to put their lives back together. “Ricky” is a shocking snapshot of social reality that’s sure to get people talking about the talent on both sides of the camera. -WEDGE