Špela Čadež tells IndieWire about the “psychological violence” of her award-winning film, which won the Academy Award for Best Animated Short.

Meaty domestic drama with a subtly dark twist, “Steakhouse” is an animated short that offers what Slovenian filmmaker Špela Čadež calls “psychological violence” from the table.

The 10-minute short film, which has won more than 30 awards at more than 150 festivals and was recently shortlisted for an Oscar, unfolds the story of married couple Franc and Liza with the help of intelligent cinematic storytelling.

Detained at work, Liza anxiously rushes home for a special birthday dinner timed to coincide with his arrival. Wilder and wilder jazz (from the work of Slovenian experimental lo-fi musician Andrej Fon Olfamož) floods the kitchen, while Franc’s meticulous preparations turn into anger at Liza’s tardiness. Franc grumpily ruins the meal and fills their small apartment with billowing clouds of poisoning, then forces Liza to witness his violent nibbling – in hideous close-up – but his malice turns out to be his own fault. No spoilers, but the ending lands on a nasty final pitch that’s oddly comforting and totally deserved.

The Slovenian-French-German co-production is a sequel to “Nighthawk”, Čadež’s masterful 2016 short film in which a drunken badger recklessly hides behind the wheel of a car on the highway. Both films use multi-plane animation, a precise technique developed at Walt Disney Studios that moves layered elements next to the camera to create the illusion of depth.

“What I love about technology is that it offers so many coincidences,” Čadež told IndieWire. “For me, it’s always a playground of lights, shadows and materials. Sometimes you put something in between and it just works or (I don’t know) playfulness (gives) illusion. I really like technology. I think it has a lot to offer. And above all, we love working in it.” 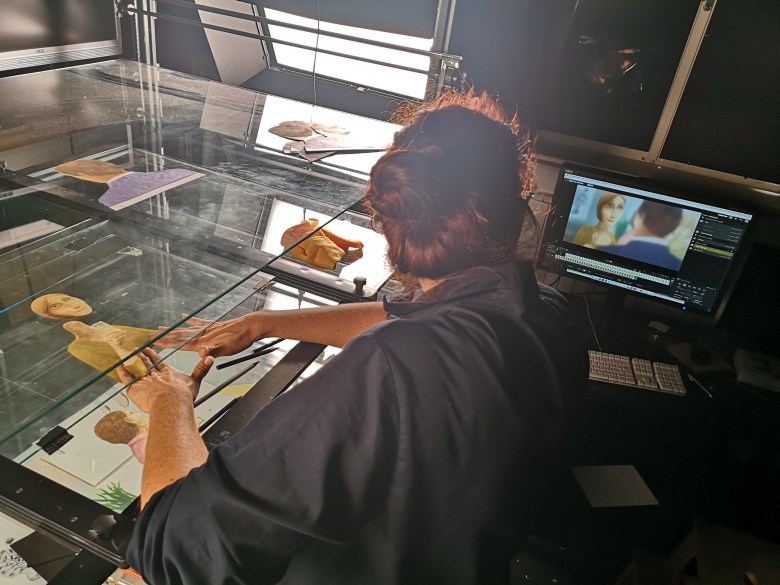 The visuals of “Steakhouse”, Čadež revealed, were partly inspired by the semi-pornographic tropes of popular cooking shows. “What shocked me was the way they filmed this act of cooking because they were so brutally aggressive with the camera setup that it was almost in the middle of the hot pan. It was so close to steak. And those extreme close-ups, those were about more than just cooking,” he said, explaining that these shows tend to fetishize the chef’s power with their dynamic energy and intimate camera placement.

Steakhouse’s cut-out characters and billowing clouds of smoke draw inspiration from the Russian animator Jurij Norstein’s beloved 1975 short film “Shun in the Fog”. which also used a multi-plane camera. Countless elements were painted and cut by hand to create each frame of animation, often in real time.

“We tried to prepare things in advance, but it’s actually really hard to do because when you put things under the camera in the multiplane, sometimes things that are beautifully drawn just don’t work well and you have to do them completely differently. or maybe the colors don’t work,” said Čadež, recalling that the small team of four animators often painted directly under the camera. “Especially the lights and shadows,” he added.

“It’s almost like painting a canvas,” said Čadež, describing how sometimes the random placement of a piece of colored paper gives an unexpectedly beautiful result. “There are a few things you can do beforehand, especially with replaceable parts. We can pre-animate them on a computer, print them, and then color them. But nevertheless, you have to try whether the color works, whether the shades are okay, whether they are not too jumpy. So there was a lot of testing before the final shot.”

Čadež is fascinated by difficult subjects, fueled in part by his busy childhood; his films deal with painful, often hidden topics such as alcoholism and domestic violence. “Steakhouse,” he said, “invades” Franc and Liza’s private lives, revealing usually hidden moments at home. “My parents used to fight a lot and I remember the feeling of wanting to get out of there and feeling powerless in that situation. But now film allows me to be there with the camera as an observer.”

The script for Steakhouse was written by Čadež’s partner, Gregor Zorc, who also co-wrote the script for Nighthawk. “He’s always trying to get me to go as far away from clichés as possible,” Čadež said of their collaboration, sharing how he urged her not to create “a character that you can see from 1,000 meters away that’s offensive.

He added: “Actually, people who don’t look like that can be like that. And it’s much more interesting to find characters who don’t really show it, but suffer from it.”

According to Čadež, the delightful ending of the film was contrived from the beginning. “Usually when we write stories, we look for the ending, but here the ending was so strong that everything else just had to lead to it,” he said. “I remember the moment he told this story in five minutes and showed the ending, but then it took us almost three years to make the film. So yeah, that’s the beauty of animation.”

“Steakhouse” it is now streaming on shortoftheweek.com and the Short of the week YouTube channel.